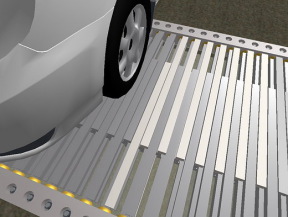 Bridge expansion joints are technical structures needed to mitigate the result of the efforts caused in the deck end areas of the bridge by expansion or contraction.

Bridges are plate form buildings, or an array of plates. Gaps between two such "plates" - adjacent elements of the superstructure of a bridge - get called dilatation bearing. The unhindered crossing of vehicles over these joints is ensured by specially designed devices, called joint systems. The expansion joint dimensions change slowly over time, mainly from summer to winter, but also from day to night, due to the thermal differences which cause the contraction or dilatation of the elements the superstructure. In addition, there appear faster moves, short-lived, because of the traffic and variations its values, and also violent movements caused by earthquakes or strong winds. The problems increase with the bridges gauge, joint systems must cope with these complex issues, to ensure the fluency and the traffic safety in all conditions. Strength and flexibility are key qualities required of such devices, in addition to easy maintenance and easy replacement in case of need.

The problems posed by large bridge sections, whose heads pronounced move on different directions, can be solved only by joint systems able to tolerate simultaneously:

- extensive longitudinal of movements expansion / contraction; transverse swing - appeared especially at the hoban the bridges (suspended on wires); moves of up / down, result from moving horizontally of movable bridge heads, which show an accentuated slope or buckling elements long, that for a continuous beam, or from earthquakes; twisting moves (torsion) characteristic especially hoban bridges, caused by strong winds or value of the asymmetric two-way traffic movement.

For all these joint systems, our product CAMELOT shows its ingenious technical solution, safe and affordable.